100 Most Influential People in Finance
"Risk Management Elevating Risk to Rocket Science"
Rusate runs a dynamic program that hedges against Mother Nature and the volatility of natural gas prices. It can be adapted to hedge other commodities.

Mr. Rusate brings with him a depth of experience in the financial services industry. After graduating from Quinnipiac College in 1979 with a Bachelor of Science Degree in International Finance, he spent the first 8 years of his career with Union Carbide in various International Treasury assignments, including Hong Kong and Singapore. He then joined the General Electric Company as the Managing Director for Foreign Exchange and Commodity Strategy where he managed sovereign risk. He was also the Treasurer of GE’s largest division, Power. Mr. Rusate is the President & Founder of Rusate Capital Management.

"Academy is proud to add such an accomplished individual to our advisory board,” stated Academy’s Chairman and CEO Chance Mims, “Dave brings a renowned expertise that will be a strong additive to our value add proposition on behalf of clients as well as our social mission." 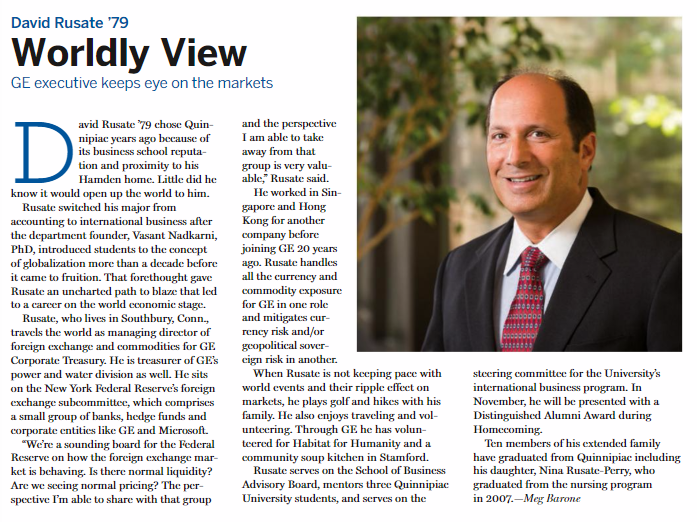 By Lananh Nguyen (Bloomberg) -- Currency traders are looking past the bickering between President Donald Trump and Republican senators to assess the market-moving potential of an overhaul of the U.S. tax system. The conclusion: It would be a boon for the dollar, but not any time soon.

The Bloomberg dollar index has pared its 2017 drop to about 7.4 percent after rebounding in the last month on speculation that some form of tax cuts will become law, spurring economic growth and encouraging American companies to repatriate overseas earnings.

Not so fast, say Rusate Capital Management LLC and UBS Wealth Management. Their view is that a revamped tax system could support the economy and the greenback, but that it’s more likely next year’s business, rather than a trigger for an immediate rally. There’s also the interplay with monetary policy to consider -- some analysts give more weight to Federal Reserve decisions in coming months.

With House Republicans saying their goal is to release a bill on Nov. 1, below are some themes that currency analysts and investors are focusing on as the plan takes shape.

One of the administration’s key aims is to reduce the levy on U.S. companies’ offshore profits closer to 10 percent from 35 percent, which Trump has said will cause money to come “pouring back.” Yet predictions vary for the amount of cash that corporations could repatriate from their estimated stockpile of $2.6 trillion stashed offshore.

JPMorgan Chase & Co. concludes dollar bulls may be disappointed, predicting the flow back into dollars may be around $456 billion.

“The reality of corporate repatriation is that the likely FX flow is much smaller than headlines suggest, and the historical impact from such flows shouldn’t be over-read,” analysts Daniel Hui and Niall O’Connor wrote in an Oct. 6 note.

The key, according to JPMorgan and other banks, is that much of the money is already in the U.S. currency, hedged or in illiquid assets.

“I don’t think that the repatriation tax change is going to have much impact at all on the dollar because a lot of the money is already held in dollars offshore,” says Robert Sinche, global strategist at Amherst Pierpont Securities LLC. Bank of America Corp. estimates inflows ranging from $250 billion to $400 billion.

“The FX impact from any repatriation flow is a very jagged and lagged one,” John Shin, an FX strategist, said in an Oct. 17 report. “Ultimately, we do think that a base case for a repatriation act would be a positive impact for the USD on net”.

Australia & New Zealand Banking Group Ltd. says it could be as little as $140 billion. “If history is any guide, the effects of corporate repatriation on the USD are often dwarfed by evolving monetary policies.”

The prospect of repatriation aside, tax-system changes still stand to help the dollar by leading traders to anticipate quicker economic growth and more aggressive Fed tightening. “You could have as much as 10 percent appreciation” next year, says David Rusate, founder of corporate advisory firm Rusate Capital.

“Corporate tax reform could have a much bigger impact on the dollar because of the effect on potential inflation expectations, higher interest rates and investors seeking yield,” Rusate says; “What’s good for the dollar is anything that urges the Fed to hike rates further,” says Thomas Flury, strategist at UBS Wealth Management. “Anything that would enhance the deficit and then lead to a short-term rise in demand could lift the dollar,” he says. The Institute of International Finance sees similar “secondary effects”. “If we assume these proposals provide some boost to U.S. growth prospects and competitiveness, it could lead to increased foreign portfolio equity and direct investment in the U.S. -- a dollar-positive event over the longer term,” the industry group writes in a report

There’s a historical precedent for evaluating the impact of any tax overhaul: the Homeland Investment Act of 2004, which went into effect during the administration of George W. Bush. It provided for a one-off tax holiday on foreign earnings. It’s a matter of dispute, however, whether the act contributed to the dollar’s rally in 2005 after three years of losses.

“This was a positive for the dollar,” says John R. Taylor, head of Taylor Global Vision. “Our analysis and models were showing us back then the direction the dollar should be going, versus different currencies, due to certain factors. And since the dollar was trading stronger than that in some cases, we felt it was the tax effect.”

JPMorgan has a different take, viewing the greenback’s advance in 2005 as mostly a result of easing concern about the U.S. current account deficit as the Federal Reserve raised rates. “Even years afterward, we do not have an entirely clear breakdown of what happened” as a result of the HIA, Bank of America analysts wrote. While there’s an inclination to attribute the dollar’s gains to the HIA, it’s hard to disentangle the policy from other sources of support, including Fed hikes and European political developments

--With assistance from Liz Capo McCormick and Katherine Greifeld.

Rusate worked at General Electric Co. for 25 years in Connecticut, most recently as managing director for foreign exchange and commodity strategies; also was treasurer of power division. Previously was a member of the FX committee sponsored by the Federal Reserve Bank of New York. Advisory service will focus on currency-related aspects of acquisitions, integration and hedging programs. Rusate says he’s starting the business “to share my expertise with growing companies to help them conquer international marketplaces”. Also plans to start an investment adviser in 2018.

"As Rusate describes it, his principal role is to ensure that day by day every part of GE minimizes its FX risk. "We aren't looking for a home run/strikeout scenario," he says. "We want to eliminate the downside and, if we get lucky, allow the businesses to hit a few singles and doubles."

"GE sources and prices goods and services in no fewer than 30 currencies, generating in excess of $15 billion annually in non-dollar costs and revenues. Accordingly it is treasury's goal to protect operating margins and seek a limited upside through Rusate's centralized portfolio hedging program. GE's FX treasury operation is measured against standard internal and external benchmarks. But what is not so easily quantified, Rusate believes, is the real measure of his team's success: the extent to which his team is able to help business managers translate GE's superior FX execution capabilities into the best customer pricing and supplier terms."

Quinnipiac University honored eight of its top graduates, including David B. Rusate of Southbury, at the Distinguished Alumni Awards Luncheon

The Distinguished Alumni Award is presented biennially to alumni who: display outstanding leadership and achievement in their professions or careers, which enhances Quinnipiac’s reputation; continually serve their local and global community and Quinnipiac through their personal and professional participation in various civic and local affairs; act as a conduit for alumni who are looking to re-connect or further develop their relationship with the institution; and display a continuous philanthropic loyalty and bond with Quinnipiac.